What is Memory - Explained in Simple Words

Memory is the dynamic process by which we integrate and retain information that we perceive in our environment. Einstein interestingly captured this idea by saying “memory is deceptive because it is colored by today’s events”. Memory is the part of human cognition that gives us the capability to learn. It allows us to utilize the information we have learned and our past experiences to benefit and guide our daily interactions.

The Different Forms of Memory

Sensory memory: This form of memory is a temporary storage for sensations and stimuli we experience in our environments.

Short-term memory: This form of memory refers to when information is temporarily held in the brain, from seconds to hours. One is consciously aware of this information.

Working memory: Working memory is the active player in short-term memory. It specifically helps us use information in making quick decisions and guides our interactions. For example, how we might behave in a situation or how we communicate.

Long-term memory: This form of memory is when information is held in the brain for a very long time, which can be for years. An example might be how to ride a bike, or your childhood home address. This type of memory can be maintained outside of conscious awareness.

Long-term memory has both an explicit and an implicit function. The explicit function involves the unconscious and quick recall of autobiographical, episodic and semantic memories. These are memories that are encoded with a specific meaning or include factual and conceptual information. In work and classroom settings, we rely on explicit memories to directly apply memorized information quickly to problems at hand. The implicit function involves the storage of procedural memory that consists of our learned skills and habits. We unconsciously rely on implicit memories when we type on a keyboard or complete familiar and routine tasks in our work.

Recently, in his book called Thinking, Fast and Slow, Nobel prize recipient Daniel Kahneman coined a new idea for the organization of memory involving two processes called System I and System II. System I is our ability to automatically apply previous knowledge to situations, where System II involves the deliberate processes like critical thinking, creativity and intentional thought.

How Memory is Formed

A memory starts with perceiving our environment through a multi-sensory experience of vision, sound, smell, and feeling. This sensory information then goes through three main stages as it’s stored for later retrieval.

Encoding: The process by which sensory information, like pictures or sound, is changed into a compatible form of information that the brain can process and subsequently store. Our brains are also capable of encoding information with meaning. The information from the outside world and our experiences ultimately gets changed into chemical and electrical information in our brains.

Retrieval: This is the process by which we can access the information stored in our brain. The recall of information can be stimulated by an environmental cue such as a specific smell or place, or it can occur automatically without the presence of a cue. 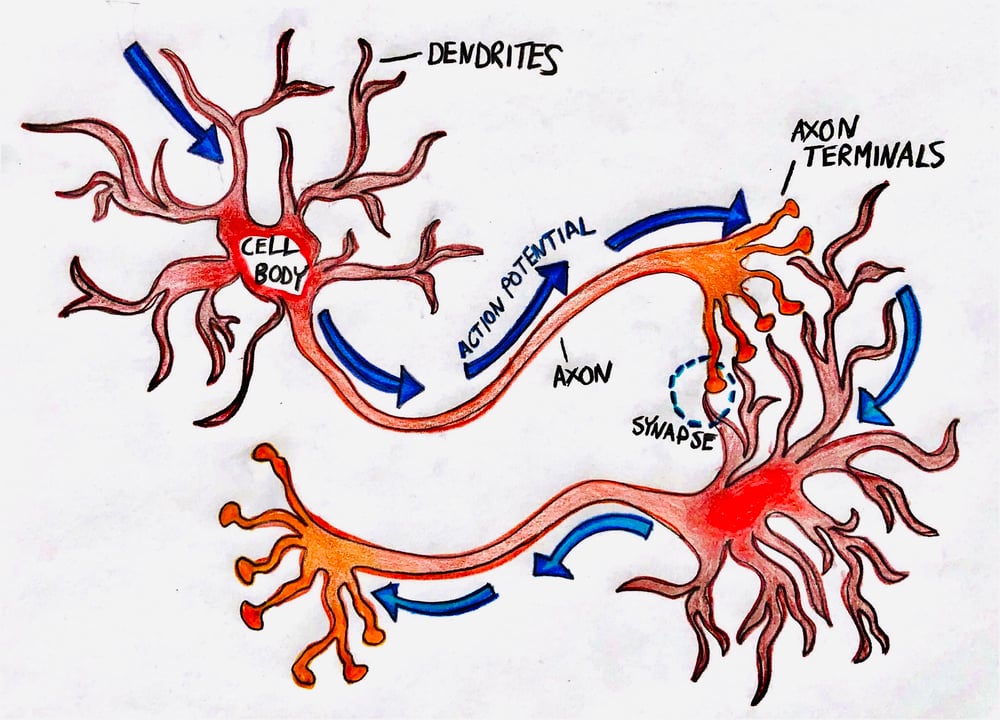 An illustration of how an action potential or electric signal travels between two neighbouring neurons.

In our brains, neurons communicate with each other by using chemical and electrical information. The junction between two neurons is called a synapse, which is the main site where communication exchange occurs. First, when stimulated, a neuron generates electrical signal called an action potential. This electrical signal will travel down the neuron's length from its dendrites until it reaches the end of the neuron, the axon terminal. At the end of a neuron, a synapse, or connection is formed with a neighbouring neuron. The electrical signal will then stimulate the production and release of chemical signals, called neurotransmitters. These neurotransmitters are released by the neuron to be received by receptors on the neighbouring neuron. As a result, the neighbouring neuron is activated. This new electric signal travels down the next neuron from its dendrites to its axon terminal to relay the message. 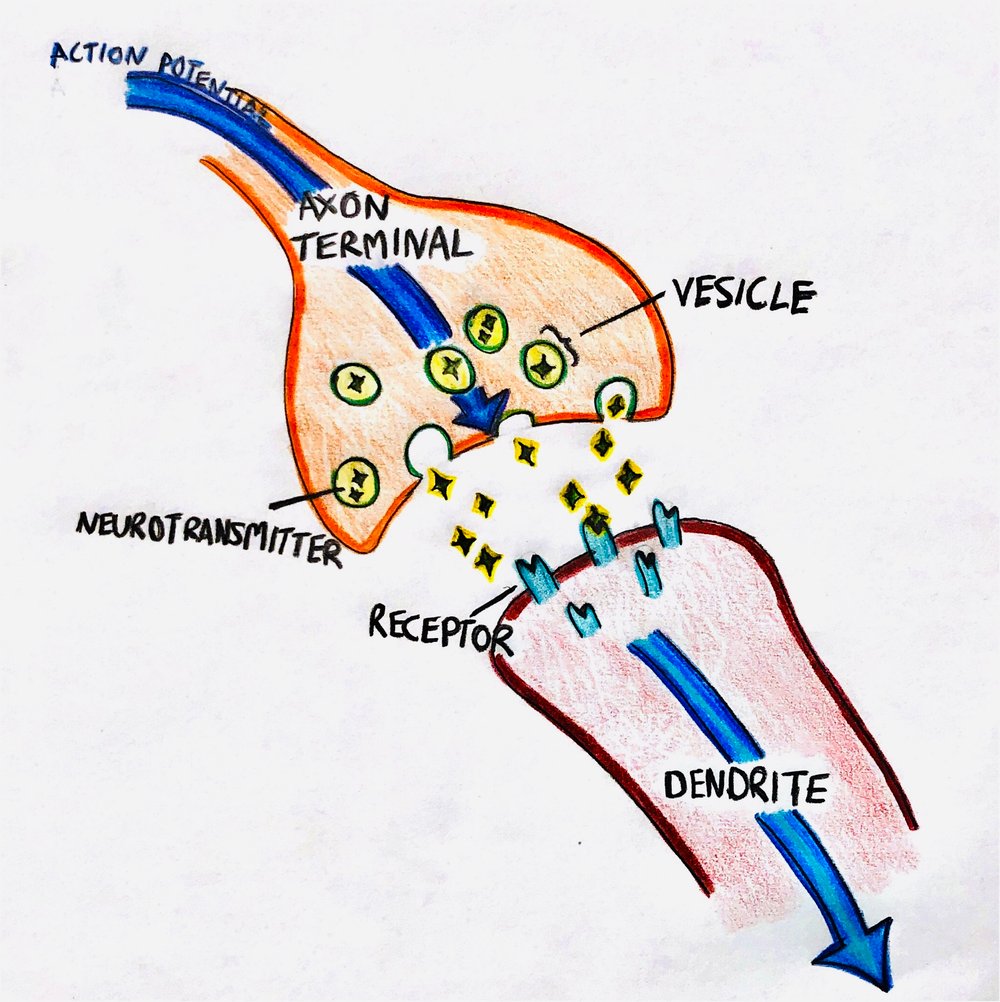 A close-up of a synapse at the axon terminal of a neuron and dendrite of its neighboring neuron.

These neuronal connections are very flexible in nature and are organized into various networks. These connections can adapt and change depending on the nature of the stimuli they receive. New connections can be made when new information is introduced, or the information can change already established networks. If a signal is continuously sent between two neurons, this connection will become stronger. Famously stated by Canadian psychologist Donald Hebb, "cells that fire together, wire together." Hebb was a pioneer in working towards understanding how memories can move to long-term storage and the concept of synaptic plasticity. The process by which neuron connections become stronger is called long-term potentiation (LTP). This process allows for information to be stable for more extended periods of time in the brain.

The opposing process to LTP is called long-term depression (LTD). LTD is the process by which connections between neurons become weaker. LTD is essential during development to allow for the proper connections to form and is critical in refining information. These neuronal connections are not just susceptible to the number of times they get activated, but are influenced by several environmental factors, including diet, sleep, and stress. For example, during sleep, both LTP and LTD processes occur. LTP may occur during sleep to strengthen connections made from the new things you learned during the day, where LTD may occur to refine connections. Without sleep, you experience a negative impact on your ability to remember and learn.

Some of the main structures involved in memory creation and storage include the hippocampus, the cerebral neocortex, the amygdala, the basal ganglia and the prefrontal cortex. Near the centre of the brain, in the temporal lobe, sits the hippocampus which is critical in memory formation. This structure's name comes from the Ancient Greek name hippokampos meaning sea monster, due to the hippocampus's seahorse-like shape. The hippocampus is known for the formation and storage of memories about specific events (episodic memory) and places (spatial memory). Some of these memories can be stored in the cerebral neocortex for more extended periods of time. The cerebral neocortex is the large, outer, wrinkly portion of the brain. It is also involved in higher cognitive functions that include reasoning, logic, motor function and language.

Another brain structure that is typically involved in memory is the amygdala. This structure also resides in the brain's temporal lobe and is easily recognized by its almond-like shape. This structure is important in the emotional aspect of memory. For example, the amygdala is heavily involved in creating fearful memories and is a known target in anxiety and post-traumatic stress disorder (PTSD) research.

The basal ganglia are important in memory when considering more implicit memories based on movement. The basal ganglia is activated during procedural or habitual learning, in addition to regulating our motor activity. Lastly, the prefrontal cortex is essential specifically for working memory. As described, it will help utilize short-term sensory information in everyday tasks that require attention and knowledge of one's environment.

A general sketch of the brain areas involved in memory processes.

The formation, storage and retrieval of memory are intricate processes that involves multiple brain structures. Memories are formed when sensory information experienced in our environments is turned into electrical and chemical information that our brain can process. The connections established between neurons can either be strengthened or weakened over time as messages or information is sent or received. These flexible connections are susceptible to use, time, and various other environmental factors that influence the nature of memory.

What do Accountants recommend for businesses seeking financial relief from COVID-19?

Learn about
Health Spending
Accounts
for a
Family Business

Learn
About
Health
Spending
Accounts
for a Family Business